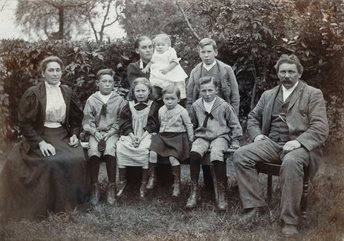 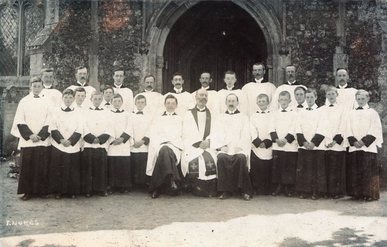 The photographs above  give us an insight into Ralph Buckingham who is commemorated here. On the top left is the Buckingham family and top right is the St Remigius Choir in 1909 of which Ralph was a member.
RALPH was drowned at sea on June 5th, 1916, aged 21, His name is on the Naval Memorial at Portsmouth. He was born on 12th February 1895, the fifth son of Agnes Mary (nee Shrimplin) and the late Frederick Thomas Buckingham. As a boy he was in the church choir and was the first to join the Hethersett Troop of Boy Scouts, but at an early age he determined to enter the Navy, though his first attempt to gain admission met with failure. In order to pass a medical test a serious operation was necessary. We do not have information as to just what this operation was. It is said, however, that it did not alter his purpose and he walked into the operating room singing.

Ralph joined the Navy, aged 18, on 12th February, 1913 for a 12 year engagement. Three scars on his right leg and one on his left are recorded and these may have been related to the operation. After serving on several vessels and a course of torpedo instruction, he joined the crew of HMS Hampshire as an Able Seaman on 25th June, 1915.

In the great naval victory off Jutland on May 31st, 1916, the Hampshire played her part, ramming one enemy submarine and sinking another by gunfire. She seems to have come out of the battle unscathed, much to Ralph's relief as he wrote in a letter to his mother which was, sadly, to be his last.

Mrs F. T. Buckingham has received official information that her son Ralph, who was a 1st Class A.B, went down in HMS Hampshire. He joined the navy at the age of 18.It is of particular interest that after the news of the disaster to the Hampshire was published, his mother received a letter from him in which he spoke of having come safely through the recent naval battle.

Ralph's late father was a well sinker, wood pump maker, plumber and house painter. When their father died, Ralph's elder brother, Frederick Herbert, took on this business and Walter, the eldest son, took charge of the ironmongers' shop and post office which is now the Macmillan Charity shop in the village. Lewis the 4th son married Nurse Moore. Their son Lewis Alan Martin is still alive in Sydney, Australia and well into his 90s. 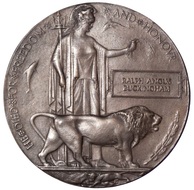 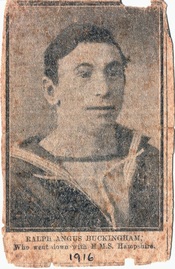 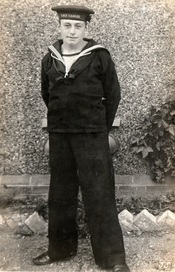 On the left is a commemorative bronze plaque issued in Ralph's memory. In the middle is a newspaper cutting from the Hampshire News and on the right Ralph in his HMS Ganges uniform.
After setting up this site we were contacted by Lewis Buckingham, who is Ralph's great great nephew. He has kindly sent us and given permission to use transcripts of a tape made by Ralph's brother Forester. You can read this by clicking here

Forester had the following to say about Ralph:

"My brother Ralph often was in trouble himself. I think it was in nineteen hundred and four he slipped and fell down what we called the saw-pit at the back of dad's premises, where he used to saw the logs, ready for making the pumps he used for outside taps, and things like that. Poor old Ralph broke his leg. He was confined to bed for quite a while - it took quite a while for his leg to heal. While he was in bed I visited him from Great Yarmouth, and we had a lot of nuts we were eating there. And I must have dropped one broken nut into his bed. Hazelnuts, they were. Some days after it, poor old Ralph complained of a very very bad pain in his back, and the doctor Deacon examined him and found this nut had got imbedded in the flesh of his back. He had the scar up until the time he died.’

He always told me about one occasion when he was a schoolboy, that he was told to see after the school fire, and poke it and replenish it with fuel, and he left the poker in it, and it got red-hot. And while he was there, one of the boys in the class had trouble with the headmaster, who picked the poker from Ralph, and chased the headmaster around with a red-hot poker. When the poker got cold, as the headmaster thought, he turned around and grabbed it from the boy, and chased him around the class, and gave him a good hiding as well.'

He worked at Hethersett Railway station, then Blofield S..[tape drops out]  ..the Great Eastern railway before he joined the Royal Navy.’

He had an operation before he joined the Royal Navy, and he was in Norwich hospital. He's always told me, that when he came out of the anaesthetic, he was singing hymns, because there'd been a church service the day before. He had a very good voice and everybody in the ward was saying how very nice he sounded.

Above are the two sides of a postcard written by Ralph to Forester on January 2nd, 1915. The postcard is addressed to 41 Albion Road, Great Yarmouth. It is quite difficult to decipher but Lewis Buckingham has had a good go:

I hope you are quite well as glad to say am I. Thanks for letter and c (?) but don't get no time for much writing.

Your Ever Loving Bro
Ralph

Dear to all I know not forgetting Mother (?) of No 18
Powered by